Leonardo da Vinci was a prolific inventor and artist who came up with new ideas and redesigned inventions from earlier times.

This catapult is one of his redesigns from the medieval catapults of 400 or so years earlier (no one really knows when or where the Medieval catapults were first invented, but the Medieval ones are based on the ancient Greek ones). Only two drawings of his catapult have been found, and we have modified it to make it easier to make, and use, as a working historical model.

With the Medieval catapult the force of twisted rope is used, this uses the tension stored in bent wood to hurl objects, usually over 15 feet. With no modifications you can experiment flinging with grapes, and those fun mini marshmallows too! A great way to introduce graphing for kids! 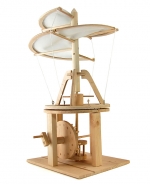 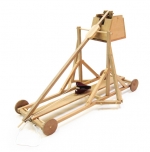