Originally invented by the Greeks over 2000 years ago and widely used by the Romans in battles and sieges, the Catapult had many different methods of launching projectiles. During the Roman Empire the Catapult was refined and improved and this model represents a smaller version of a common catapult style of the time.
Based on drawings and written records, this catapult re-creates the way in which tension powered siege engines worked and can fire small clay balls (included) and other soft projectiles – over 15 feet! 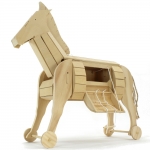